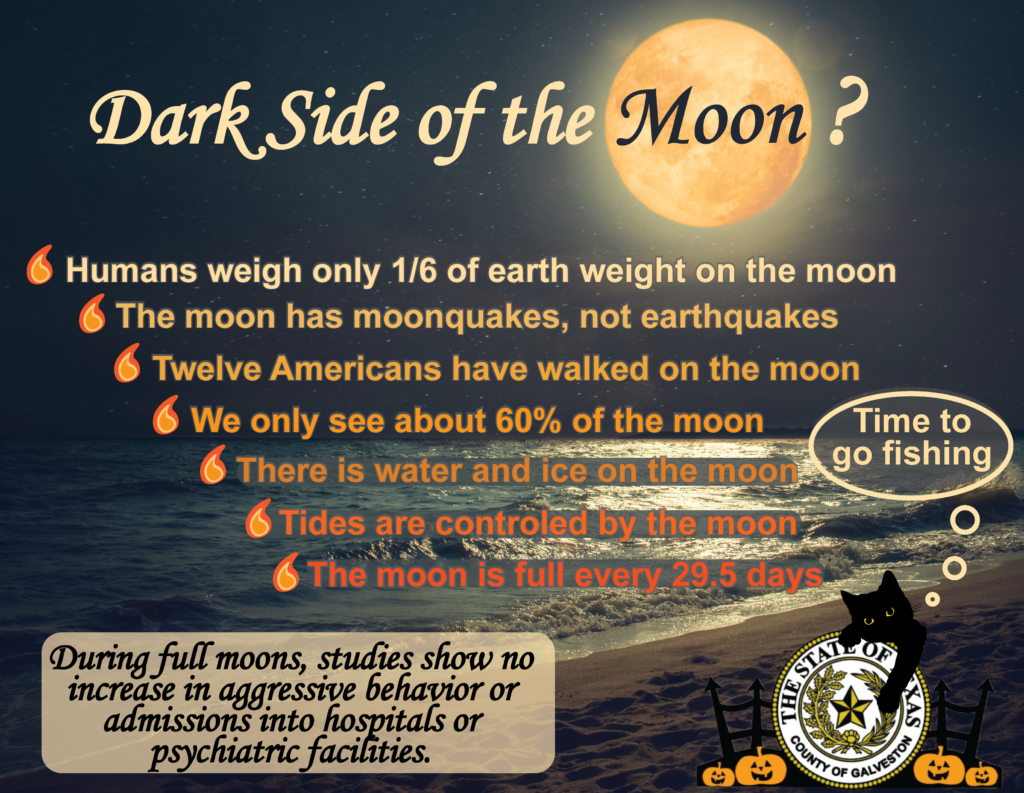 We have the Hunter’s Moon arriving in the sky tonight. This is the first full moon cycle after the Harvest moon.

Some interesting facts about the moon is that it has 1/6th the gravity of earth.

The moon, much like the earth, also has moonquakes.

We only see about 60% of the moon, due to a phenomenon called “tidal locking”. Tidal locking keeps the same face of the moon pointed towards us as it orbits.

In 2020 NASA announced that water can be found in the form of ice on the shadowy regions of the moon.

The moon has twice the tidal influence as the sun. The solar tides are about half as big as lunar tides. When the two are aligned, the tidal force is additive, causing the tides to be extra high.

There have been 12 Americans who have walked on the moon. The first being Neil Armstrong in 1969. Neil’s spacewalk on the moon lasted about two and a half hours. The last to walk on the moon was Harrison Schmitt in 1972. Harrison had two spacewalks, totaling a staggering 22 hours.

The one thing the moon does not have influence over is aggressive behavior, mental states, or hospital admissions. While the word lunacy does have root in the word Luna (Latin for moon), it comes from a belief that the moon influenced mental states. The full moon effect is a common myth believed and circulated. There is no research to back this claim up. The study that did confirm the full moon effect did not take into account that the time the data was collected over had a disproportionate number of full moons that occurred on weekends. Weekends were the factor that accounted for the rise in the admissions.

Anecdotal evidence of the full moon effect can be attributed to confirmation bias and illusory correlation. It is far easier to remember the presence of a full moon on a particularly eventful night. It is hard to remember all those calm nights with a full moon and we tend to forget the moon all the other crazy nights where the moon was a less than vibrant waning gibbous. So enjoy those beautiful full moon nights in peace.