Mark your calendars to get rid of old tires March 21st-March 25th!

The facility will be closed March 11th – March 20th as offices move into temporary buildings on the property.
Over the next year, offices will operate out of the temporary buildings while construction is done to update the facility and add more than 10,000 sq. ft.
This facility houses branches of the Tax Office, County Clerk, District Clerk as well as the Precinct 4 Justice of the Peace Court and Constable.

The Galveston Park Board of Trustees is considering construction of a breakwater offshore of Dellanera RV Park in hopes of reducing sand loss in the area.

A breakwater is an artificial offshore structure that protects a harbor or a shoreline from the force of waves. Breakwaters can be made of stones, concrete or other materials. 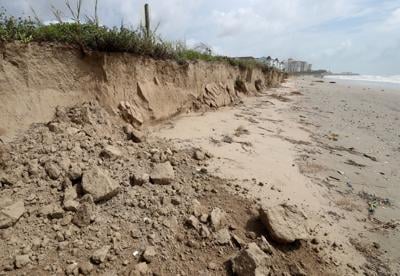 That erosion is a hazard for FM 3005, a major thoroughfare and an evacuation route during a hurricane, according to the park board.

The park board is working with the U.S. Army Corps of Engineers to determine a structure and design for a breakwater that would most effectively reduce erosion in that area, according to the park board.

The park board has made other efforts recently to slow erosion in the area.

In 2015, crews laid 118,000 cubic yards of sand in a collaboration among the park board, Texas General Land Office, the city, Federal Emergency Management Agency and Seascape Condominiums.

The park board has been working with state and local entities to lay hundreds of thousands of cubic yards of sand along island beaches, mostly concentrated in front of the seawall.

The park board started talking with the corps about a hard structure in the area after Hurricane Harvey in 2017.

Although the storm didn’t cause the same destruction to homes and businesses on the island as it did on the mainland, it caused severe beach erosion.

The area already is slated for some attention.

The park board has a project on the books to lay sand around Dellanera as part of a Harvey mitigation project and another beach construction project down the line that will lay sand from the RV park to at least 8 Mile Road.

Galveston County is offering a FREE Heavy Trash Event in Crystal Beach on March 4th from 8am – 5pm and March 5th from 8am – noon. The event will take place at 920 Noble Carl Dr., Crystal Beach, Texas.
Items Accepted:
– Heavy Trash
– Debris
– Heavy Brush
– Wood
– Brush
– Furniture
Items NOT Accepted
– Hazardous Materials
– Paint
– Electronic Waste
– Automotive Fluids
– Batteries
– Commercial Tires
– Household Trash
For additional information about this event or the items accepted, please contact the Galveston County Nuisance Abatement Office at 409-766-4509.
Due to a leak that was discovered by the City’s Public Works Department at the City’s main 42 inch water line, League City is asking customers to voluntarily limit their discretionary use of water which includes sprinklers, landscape watering, and outside car washing. (This is Stage 1 of League City’s Drought Contingency Plan.)
This morning, contractors will be on site of the leak to determine its severity and how to move forward with repairing it. The leak is located on the main water supply line between the City’s Highway 3 pump station and Walter Hall Park. The line supplies approximately 70 percent of League City’s surface water supply.
From more info, go to: https://www.leaguecitytx.gov/CivicAlerts.aspx?AID=3394